Movies like “Boiler Room” and “The Wolf of Wall Street” hit huge numbers at the box office depicting stories of stock market scammers. In both movies, brokerage firms held massive positions in questionable stocks and incentivized their workers to put as many shares of these stocks into customers’ accounts as possible.

As the cold calling commenced, share prices in these company’s stocks rocketed, advisors made exorbitant commissions, and the brokerage firms profited by selling their massive positions. But the general investing public that fell for the scheme lost in the end, as they were stuck holding illiquid shares of questionable companies.

Movies aren’t always the result of a screenwriter’s active imagination. Some, like these, are at least loosely based on real events. In fact, these movies depict a very real form of investment fraud known as a pump-and-dump scheme.

What Is a Pump-and-Dump Scheme?

A pump-and-dump scheme is a form of securities fraud in which stock promoters artificially inflate stock prices using false or misleading information. These promoters either own a large position in the stocks they promote or are paid by large holders of shares for their market manipulation.

Throughout the promotion of the stocks, trading volume and share prices skyrocket. The gains lead the general investing public that’s buying into the promotion to believe everything is going well.

In the end, the con artists at the helm of the scheme sell their positions when they believe buyers are drying up and sellers will soon take control, dumping a massive supply of shares on unsuspecting investors. The large sale sends the price of the stock tumbling. With excessive shares now available, those who got caught in the scheme experience liquidity problems and are often forced to hold shares as the price of the stock falls.

To put it simply, a pump-and-dump scheme is a con that involves the pump — or artificial inflation — of a stock’s price and an eventual dump of shares that leaves victims with losses.

“Boiler Room” and “The Wolf of Wall Street” both depicted the original pump-and-dump scheme in which the stock promoting was done through high-pressure sales calls. However, the scheme has its roots in cold calling.

Today’s con artists use technology to their advantage in what some call the pump-and-dump 2.0.

Modern pump-and-dump schemes start out the same way old-school schemes did. They start with a person or an entity that owns a large position in a questionable company, often a penny stock or microcap stock that trades on over-the-counter (OTC) exchanges. Even some small-cap stocks that trade on major exchanges have been targets of this style scheme in the past.

The fraudster disseminates false or misleading information through email, social media, chat rooms, and even paid press release services. In most cases, the messages will claim to have information from insiders and often suggest an acquisition or another highly profitable event is just around the corner.

Just as technology led to a new wave of pump-and-dump schemers who use emails and social media boards to get false messages across, another move forward in tech has led to yet another form of the pump-and-dump con — the crypto con.

Cryptocurrency has exploded in popularity after coins like Bitcoin (BTC) and Ethereum (ETH) climbed to dramatic valuations. Like the price of a stock, the price of a crypto asset is based on supply and demand. And like the OTC environment, the crypto world is highly unregulated, serving as a hotbed for scammers.

Although the crypto market is relatively new, a recent study from the University of Florida was able to find more than 3,000 instances of pump-and-dump schemes in crypto markets. That’s startling on its own, but the study only observed a six-month time period, suggesting that tens or even hundreds of thousands of such schemes have taken place in the crypto industry since Bitcoin was launched in 2009.

There are several examples of pump-and-dump scams throughout history. In 2015, Gregg Mulholland was convicted of orchestrating more than 40 such schemes and profiting more than $250 million through the victimization of unsuspecting investors, according to the U.S. Department of Justice. As is the case with most con artists that operate these schemes, Mulholland operated in the OTC markets where it took regulators years to catch up to him.

However, the most widely known example of this type of scam was the Enron scandal.

Enron’s shares plummeted and investors lost a combined $74 billion in the process.

At its core, the scandal was a pump-and-dump scheme. At a time when the public believed Enron was in good financial health, 29 executives at the company sold off their sharest. Of course, these executives knew the true state of the company and leaned on the false information they’d been spreading to generate a profit from the sale of their shares.

How to Avoid a Pump-and-Dump Scam

Although most pump-and-dump schemes happen in underregulated markets, Enron proved that they can happen in any market. Here are a few things you can do to avoid becoming the next victim.

You never expect to be the victim of a crime. This unsuspecting nature of the average person often means obvious red flags become less obvious because nobody’s looking for them.

Keep your eyes peeled for obvious warning signs that something might not be right before you invest, including:

Unsolicited advice is rarely perceived as positive. The stock market tends to be the exception to the rule, but it shouldn’t be.

Promoters who take part in pump-and-dump schemes are masters of unsolicited advice. They’ll call you, email you, direct message you, and plaster your social media profiles with ads that present a once-in-a-lifetime opportunity to get in on big gains. They’re experts at painting a picture of an opportunity that’s too good to turn down.

Don’t fall for it!

Legitimate services that provide insights and trading signals won’t call you, text you, or send you emails or messages on social media out of the blue to let you in on an opportunity you’re missing. Legitimate players require you to sign up to receive emails and other notifications.

If you get an unsolicited email, text message, DM, or phone call with a message about a potentially great investment opportunity, be cautious.

If you choose not to ignore the message altogether, do your own research to validate any claims that have been made — and I’m not talking about reading the materials you were sent. Use Google, search SEC filings, read official corporate press releases, and search for information about the stock on analysis and research websites you regularly use before making any investment.

Research forms the foundation of any solid investment decision. Never take anyone else’s word for what you should do with your money. Instead, learn everything you can about a company before making an investment in it.

Be Wary of Affinity Advice

It’s easy to trust the advice given to you by other members of groups you’re affiliated with, and in many cases that’s OK. However, affinity is also a tool con artists use to gain the trust of unsuspecting victims.

You should do your own research and form an educated decision before making an investment, even if you were turned onto the potential opportunity by a friend, member of your pool league, an old friend from high school, or even a member of your religion.

Because it’s so easy to impersonate others online, many scammers try to make themselves look like someone you know and trust, such as a friend or a celebrity. Remember not everyone who contacts you online is who they appear to be.

Report Schemes to the SEC

The Securities Exchange Act of 1934 makes pump-and-dump schemes and other stock and securities frauds federal crimes. The act makes it unlawful to make untrue statements of material facts or omit material facts or to act with fraud or deceit upon any person in connection with the purchase or sale of any security.

These reports are important because fraudsters will continue victimizing investors as long as they’re allowed to. When you report financial fraud, you could be saving thousands of investors from becoming the next victims. You may also receive a monetary reward if your report leads to a conviction and fine.

Pump-and-dump schemes are white-collar crimes that often lead to significant financial pain for their victims. Many have lost significant portions of their investment portfolios to such schemes.

But you don’t have to be a victim.

Research is the best way to protect yourself. Instead of taking anyone else’s word about the quality of an investment, dive into the company’s website, SEC filings, press releases, and other public data to make your own educated investment decisions.

This research won’t just help you avoid scams either. It will give you a better understanding of what you’re buying, what to expect from your investments, and whether specific investments you’re considering fit well with your strategy.

How to Invest Money in Your 40s 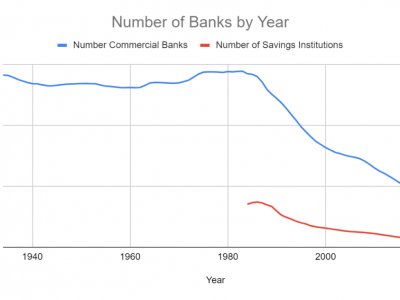 Number of Banks in the U.S.